How To Hack a Slider Selector in Google Data Studio

This post, like many, started from a conversation on Twitter.  I was patrolling for interesting Data Studio tweets when I saw a frustrated person with a request for the addition of a “slicer” to the tool. I had only just started my first coffee of the morning, so I of course thought – ‘Ah, some nube looking for a slider range selector. Poor guy!’  Fortunately, I have learned to never listen to myself before I have had at least two mugs, and never underestimate my own ignorance. I thought I should at least lend a sympathetic ear.  So, I brilliantly replied “Slicer?”

tl;dr  skip to the solution!

The poster was gracious in rectifying my ignorance.  ” A slicer is an interactive control. We use them in Power BI. You can use them in Excel too.”  Oh. Well. The least I could do was check it out as I, like everyone, have strange holes in our experience and Power BI is one of mine.  So I did a quick YouTube search as I got ready for work and got an overview of that awesome little widget.

If you’re familiar with the slicer, I won’t bore you – Let’s just say it is a powerful tool that does what dynamic filters do in Data Studio and much more.  It does many things I would like to do as well so I made a note to return to the conversation and went on about my business.  I ended up pulling an all-nighter getting out my last blog post so I didn’t respond til a couple days later. 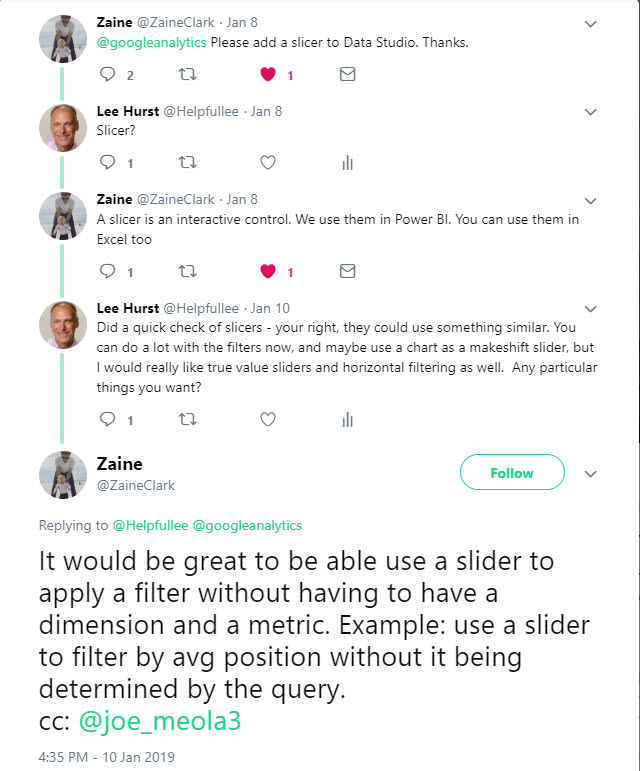 We dug in a little deeper – Data Studio can do several things a slicer can do with dynamic filters, but it doesn’t have a slider feature to allow you to select a range of values.  That is something on the development backlog and I hope it becomes available in the future.  But, I had an idea that would not let me go, and I really wanted to help.

I also realized later that the original tweet came from Zaine Clark @ZaineClark, a Senior SEO associate at Seer Interactive (a very venerable SEO and analytics group)  and he was serious about finding a solution.  Note to self: Try checking someone’s profile before you respond on Twitter!

Anyhow, here was my thinking …  Data Studio recently released a feature allowing chart filtering.  It works great on time series graphs. You can click and drag to filter for a range of dates as in the example below.

The instructions for using this new feature are still a little vague. I have only seen it used on time series, but I didn’t see that it could not be used for other graphs so I thought it could be twisted a bit to do other stuff.  After some experimenting, I found this was correct, but with some limitations.  As far as I can tell,  it only works on the of the charts and is limited to Dimensions.  This makes things a bit tricky if you want to select a range of values that is actually a metric!

Fortunately, a recent tweet from Evan Levy @EvanLevy, describing the trick to manipulate date formats, and some other tricks I had picked up on my day job building and embedding product selectors in Data Studio gave me enough to go on and give me confidence that some solution was possible.

How to create a slider control in Google Data Studio

First, you have to convert metrics numbers into a text dimension.  Note that this does not work for aggregated metrics (at least not directly). So, let’s use the example of the number of characters in a query coming from Google’s Search Console connector.

So, there you have it:  A slider hack that reproduces some of the capabilities of a Power BI slicer. You can check out the finished example. There is even a dynamic data source selector so you can try it with your own data.

Here is an example with a slider that uses the Supermetrics connector and some extra fields to jazz up the user interface a bit.

Data Studio craftsman Riccardo Zagaglia (Twitter @zagoz) just contacted me with the news that his latest creation, NBA 2018-2019 – Update pre-All Star Game,  was produced with slider selectors using the methods I have outlined here.  I’m not a big basketball fan, but the interactive report is really cool!  Click the link above to see it in action!

If you have suggestions (especially workarounds for aggregated metrics!) please leave a comment!

This site uses Akismet to reduce spam. Learn how your comment data is processed.